Dark Star, released in 1984 by Design Design, is a very underrated game, in my opinion.

Back in 1984, when I first played it, I couldn’t really be bothered to work out what to do, and just flew around blasting things randomly. When I eventually learned how to play the game properly I realised that this beautifully presented (and simple) 3D shoot ’em up was something special.

The key was in knowing how to orient yourself in the landscape (by using the maps), and knowing what to blast and what not to blast. And, having played the game quite a bit recently, I have to say that Dark Star has stood the test of time extremely well.

Considering the Spectrum’s limitations, this game is something of a technical miracle. Especially when you see how fast everything moves (and I admit: the game doesn’t look like much in stills). Well worth a play now, and (in my opinion) one of the best ZX Spectrum games of all time.

That yellow thing is a planet. If you fly into it you’ll descend down to the surface.

Planetary data for TES 281 T. A planet with an atmosphere that is “not for programmers”.

Flying through a yellow tunnel thing. Dark Star doesn’t look like much still, but moving it is a thing of beauty.

Destroyed a tower (or something) there.

Just about to crash into that structure by the looks of it. 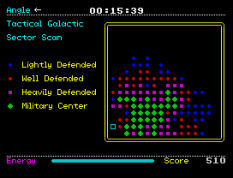 The Tactical Galactic sector map, with the key on the left. 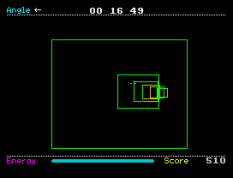 Flying down a warp tunnel in Dark Star.