Mappy is a cute-but-challenging vertical screen platform puzzle game, developed and manufactured by Namco in 1983, in which you play as a police mouse retrieving stolen goods from a mansion full of criminal cats.

You can walk left and right and can bounce on trampolines to reach higher platforms. You can also knock out the chasing cats by opening doors – either by doing it in their face, or by zapping them with a microwave from a flashing door (which moves backwards, behind you, taking out any chasing cats). Doors will only open, though, from the side with a doorknob, which can catch you out if you’re not careful.

The controls are simple: left, right, and a fire button. The fire button opens doors. Your ascent, after bouncing on a trampoline, is stopped by pushing left or right, so if you don’t do that you’ll rise to the very top of the screen, then drop back down to the trampoline again.

The main thing to remember is that the chasing cats cannot ‘get’ you if you’re in mid-air – only when you’re walking horizontally. So you can keep bouncing to avoid them. If you take too long to clear a level, though, the word “hurry” will appear on-screen and the cats will speed up and chase you more aggressively.

Once you’ve collected every item of stolen goods you then move onto the next – more complex – level. Every third level is a bonus stage where you have to bounce on trampolines to collect balloons. One thing to watch out for on the bonus level is that the trampolines change colour with every bounce, and if they’re coloured red you can only bounce on them one more time before they break. This feature also begins to appear in later levels of the main game.

Mappy is a simple arcade game that is easy to get into and fun to play. The jolly music and cute graphics give a game a distinct flavour that is child-friendly and cartoony, but the gameplay is trickier than it looks and gets more difficult as you progress. It’s a classic arcade game from the early 1980s and I distinctly remember playing it in arcades when I was a kid.

A handful of sequels were produced, including Mappy-Land in 1986 for the NES/Famicom, Hopping Mappy for arcades in 1986, and Mappy Kids in 1989 for the Famicom. Mappy has also been re-released in compilations and on various online services many times, including most recently for the Nintendo Switch and PlayStation 4. It’s a game that still endures to this day. 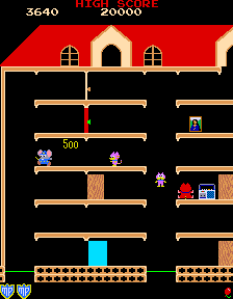 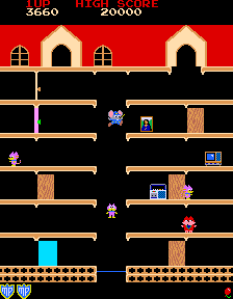 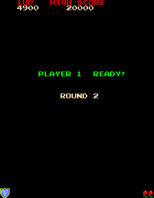 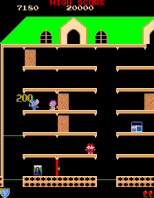 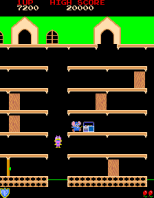 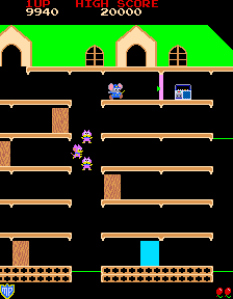 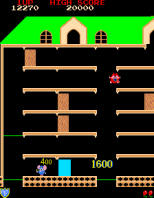 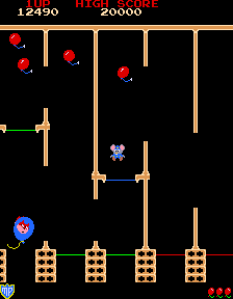 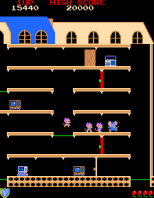 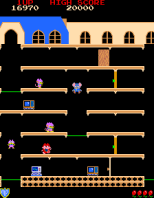 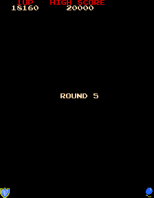 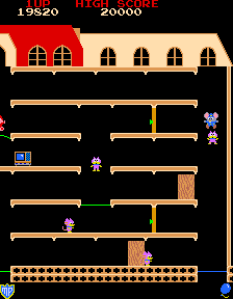 One thought on “Mappy, Arcade”