Looking at Death Star Interceptor now you might be surprised to discover that it was a “number one” game when it first came out in 1985.

And – while it did make it to the top of the games charts back then – the charts were not very reliable, and the game actually wasn’t that good, even though it does officially license use of the Star Wars theme, for a warbly Speccy interpretation of John Williams‘ classic music.

Death Star Interceptor was a case of style over content, and also maybe a touch of Star Wars fever as well. These are thoughts I had about the game when I first played it back in 1985.

What Death Star Interceptor is is a simplistic shoot ’em up – third-person, firing into and up the screen at what appear to be TIE Fighters. Perspective is not what you would call ‘accurate’, but the X-Wing clone that you fly at least tries to look like it’s firing in the right direction.

The game has three distinct stages, although the first one “Launch Site” is little more than a cut scene really. It does have some surprisingly good digitised speech at the beginning though. “Prepare to launch!” the game says in a recognisably English, female voice.

“Deep Space” is the second stage and this involves blasting oncoming spaceships until you finally reach the Death Star. As time ticks away, and you blast away, the blue Death Star slowly gets larger on screen, all the while enemy ships attack and make screeching noises as they fly by. Whether the feeble sound gets on your tits or not I guess is a matter of tolerance…

The final stage – of course – is the “Trench Run”, complete with wall-mounted lasers and ground obstacles. Complete that and you are treated to a nice explosion and the aforementioned warbly Star Wars theme music, before starting from the beginning and doing the whole thing again with no appreciable change in difficulty… Does the game ever end? Well, it did for me when I turned the power off… Death Star Interceptor was an archaic and limited shoot ’em up at the time, and hasn’t survived the rigours of time particularly well since, so unfortunately doesn’t get much love from me I’m afraid. 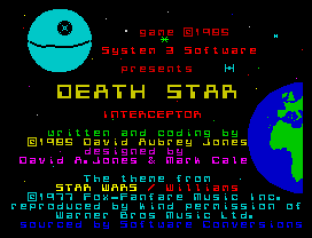 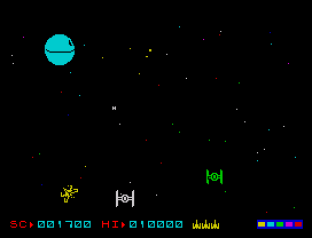 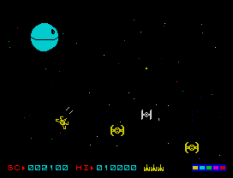 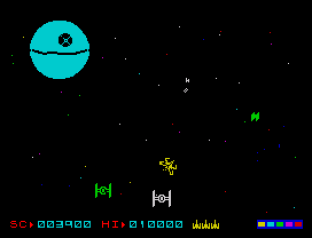 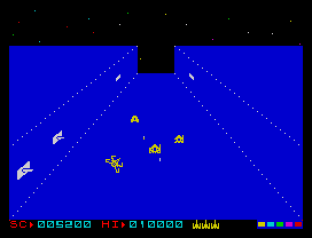 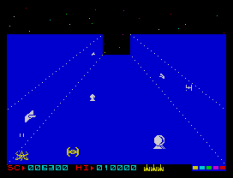