This obscure Commodore 64 classic is one of THE scariest – and most confusing – games of all time. Both in one!

In Scarabaeus you have to explore an ancient Egyptian tomb, chasing ghosts, avoiding zombies and spiders, and eventually making your way to the Pharaoh’s tomb in the centre of the third level.

Scarabeus is hard to play because it is not initially clear what you’re supposed to do.

The instructions are not much help either.

Key to solving the game is in collecting good potions and rejecting evil potions, and solving hieroglyph puzzles, in order to win more zombie traps. And also knowing how to run away from monsters to avoid being captured helps too. And, also: knowing how to use the elevator between levels. If you turn the winch handle incorrectly you can injure yourself. You need to save your health for the final level.

And you are constantly under pressure from chasing zombies and spiders. At least on the second and third levels.

The monster graphics in Scarabaeus are kind of strange, but that adds to the unsettling atmosphere. The sound effects are hella scary too. The alert when a spider comes near you… DAMN SCARY!

Scarabaeus is a unique Commodore 64 game really worth working out how to play. It’s a strange game, but it’s a decent challenge. Check the guide below for more pointers. 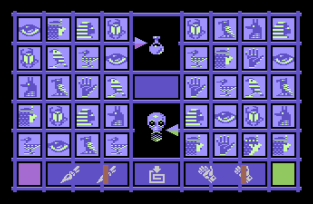 One thought on “Scarabaeus, Commodore 64”