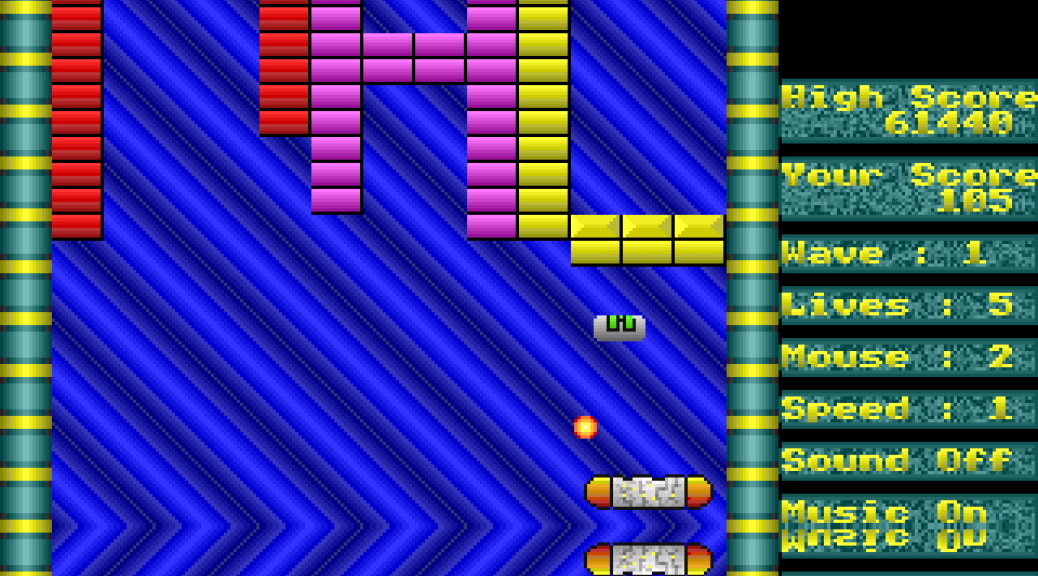 Fireball II is a garish but playable Arkanoid clone for the Acorn Archimedes, written by Simon Heather and published by Cambridge International Software in 1990.

Although the graphics look a bit amateurish, Fireball II does have a number of surprises under the hood, which make it fun to play.

It’s a bat and ball game where the aim is to bounce a glowing ball upwards, using a small bat at the bottom of the screen, in order to clear the screen of tiles. When the ball hits a tile the tile will disappear. That is: unless the tile requires more than one hit to clear, or if the tile is indestructible. When all the tiles have been cleared the game moves onto the next screen. If you fail to return the last ball on the screen you’ll lose a life. Very much like Arkanoid or Breakout.

Where Fireball II differs from Arkanoid are the variety of bonus capsules that drop down and can be collected by the bat. Plus: there are also tiles that drop destructive green balls that will instantly lose you a life if they hit your bat, which is very devious as they resemble the bouncing ball in everything but colour so your instinct is to return them. Which you have to train yourself not to do – unless you have collected a ‘shield’ capsule that allows you to do that.

The bonus capsules drop down when the ball hits certain tiles and the idea is to catch them with your bat. If you do that a change will occur and this can result in a number of useful effects. Sometimes the bat will split into multiples, or elongate, giving you a better chance of returning the ball. Sometimes the ball will multiply into many balls, occasionally with the added effect of them ploughing straight up through the tiles. Sometimes you’ll get a laser capsule that allows you to fire upwards at the tiles, removing them from the playfield. Sometimes a bonus capsule will make the ball stick to the bat, giving you the opportunity to take a breather and aim your return. If you pick up a dark blue “Jump” capsule it will even end the level and take you immediately to the next stage. From time to time you’ll also discover capsules that are disruptive and should be avoided, like the “Reverse” capsule which flips the left/right control of the bat and makes it much more difficult to return the ball. There are a wide variety of capsules to collect and while some are lifted straight from Arkanoid, others are not and they add an extra dimension to the gameplay.

While it’s fair to say that Fireball II lacks the finesse of Arkanoid (and its sequels), it is still fun to play for a while. There’s also an easy-to-use level editor that allows you to customise the layout of the tiles on each screen.

So is Fireball II better than Arkanoid? In a word: no. Graphically, it’s nowhere near as good-looking as Arkanoid. It looks gaudy and lacks subtlety – especially the backgrounds which are so busy that they visually interfere with the foreground. There’s some fairly bland music, which you can turn off, and the sound effects are a mixture of piano notes when the balls strike tiles, some digitised speech, and also some (almost certainly unauthorised) music samples for certain events. When you press pause the game plays a snippet of Frankie Goes To Hollywood‘s “Relax“, and when you enter your name on the high score table it plays a snippet of “Paradise City” by Guns N’ Roses. There’s also a nice maniacal laugh when you lose a life, but I’m not sure where the programmer got that from. Fireball II is an okay game on the Archimedes, but in the real world, when compared to other, similar games out there, it is somewhat lacking. 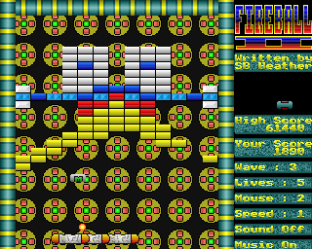 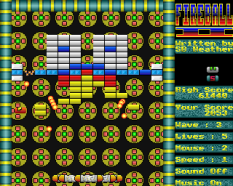 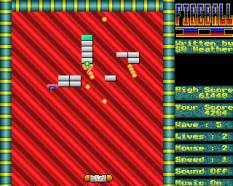 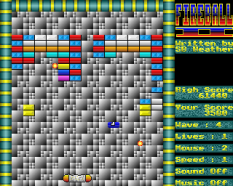 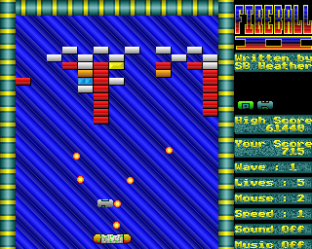 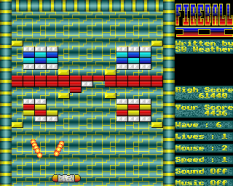 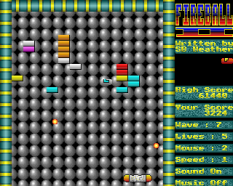 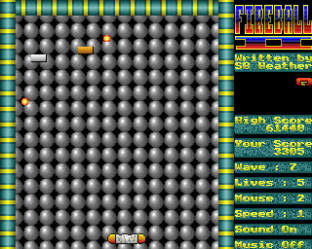 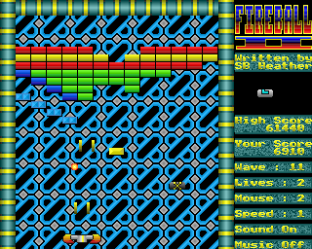 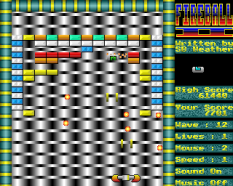 One thought on “Fireball II, Archimedes”